It's Still Winter in Texas

So Dearies, it's still Winter in Texas. Now I know that we don't have it all that bad when it comes to the winter months in Texas. In fact, most of the time we have very mild, noninvasive weather. That's a perk of Texas. I mean, when was the last time you heard someone say, "I think I'll move to Texas for the snowy winter weather they have down there." I'm going to hazard a guess and say never. You've never heard that. You've never said that. We freak out when there is a little bit of white on the ground because it's never ever there. In the winter, the ground is brown. Very ugly brown.

So! It stands to reason that Texans would hate the ice and snow. If hate is too strong a word, then perhaps strongly dislike. Let's face it, it's foreign to us. Thus the annoying, terrible, I-am-a-brand-new-awkward-horse style of driving. I roll my eyes every time I hear someone from out of state complain about the driving here. I'm going to let y'all in on a little secret: we all know. Many here can't drive on a good day, so why would you think that ice/snow would improve that? It wouldn't. Is it frustrating? Sure. But, I hardly think it's news to anyone around you. Just be patient.

Anytime I see anywhere in the north covered in snow, I just shake my head and say, "Bless your hearts." That much snow just suuuuuuuucks. It's pretty, but I wouldn't want to be out in it. Unless I was learning to ski. But that would mean I was on vacation. And, if I'm on vacation, I'd rather be at a beach. I digress! In conclusion, today with its one inch of powdery snow, is about all I can handle.  :-/

On a much lighter note, as part of my Spending Less Month, I'm baking bread. It's always scared me in the past. My mom bakes bread. My best friend Alison, her mom has always baked bread. Why should this scare me? Well, I'm not entirely sure, but I think it has something to do with proofing yeast. It sounds gross. It looks gross. But the end product of freshly baked bread...holy cow there is nothing better. So y'all cross your fingers and toes that it goes well. I want some warm rolls with cinnamon butter at the end of all this. Doesn't that just sound good when it's cold outside?   :)

This was such a simple and quick dinner. It was lovely. My sister, Danielle, made them one night and I decided that it just sounded so good that I had to have them as well. This is a recipe that we got off of Pinterest...of course...but it's unclear who posted it first. There are a ton of variations to them, so make it how you like it. This is just a great alternative way of fixing an awesome meal. Oh! And, the clean up is EASY!!

So, let's talk ingredients:
Chicken- I used boneless/skinless tenders and cut them into smaller bits
1/2 Red Bell Pepper
1/2 Green Bell Pepper
Onion- sliced, not chopped
Rotel w/ green Chilies- this is totally optional. I didn't use it because I like my fajitas simple
2 Tbsp Olive Oil
2 tsp Chili Powder
1 1/2 tsp Ground Cumin
1/2 tsp Garlic Powder
1/2 tsp Dried Oregano
1/4 tsp Salt
(to be honest, I didn't use these spices. I used my trusty homemade Chili mix. It has all the same seasonings, and it's awesome. I used enough to coat the chicken- about 1-1 1/2 Tbsp)

Cut your chicken into either strips or small bits
Slice your bell peppers and onions how you like them best. I like smaller pieces, some people like slices.

I put my chicken in a bowl, added the olive oil and spices and mixed until it was coated well. This is where you'd put the rotel in. Then put it in a glass casserole dish.

I put my peppers and onions on top of the chicken without mixing them.

Put dish in the oven for about 10 minutes.

After 10 minutes, I took some tongs and mixed the chicken and peppers with out stirring. I just kinda flipped it in the dish. Make sense?

Cook for another 10 minutes and flip one more time.

At this point I turned the oven to broil to get some crispy bits. I let it set on broil for about 5-7 minutes. Watch it the whole time because you don't want to incinerate your dinner, just have some crispy edges.

Take it out of the oven, grab your tortilla's and go to town.

Seriously the whole process took all of 30 minutes. Maybe. It's quick and it's good. Mix you up some beans or what ever else you like on your fajitas, and you're good to go. I put my Avocado Dip on them and it was so awesome! 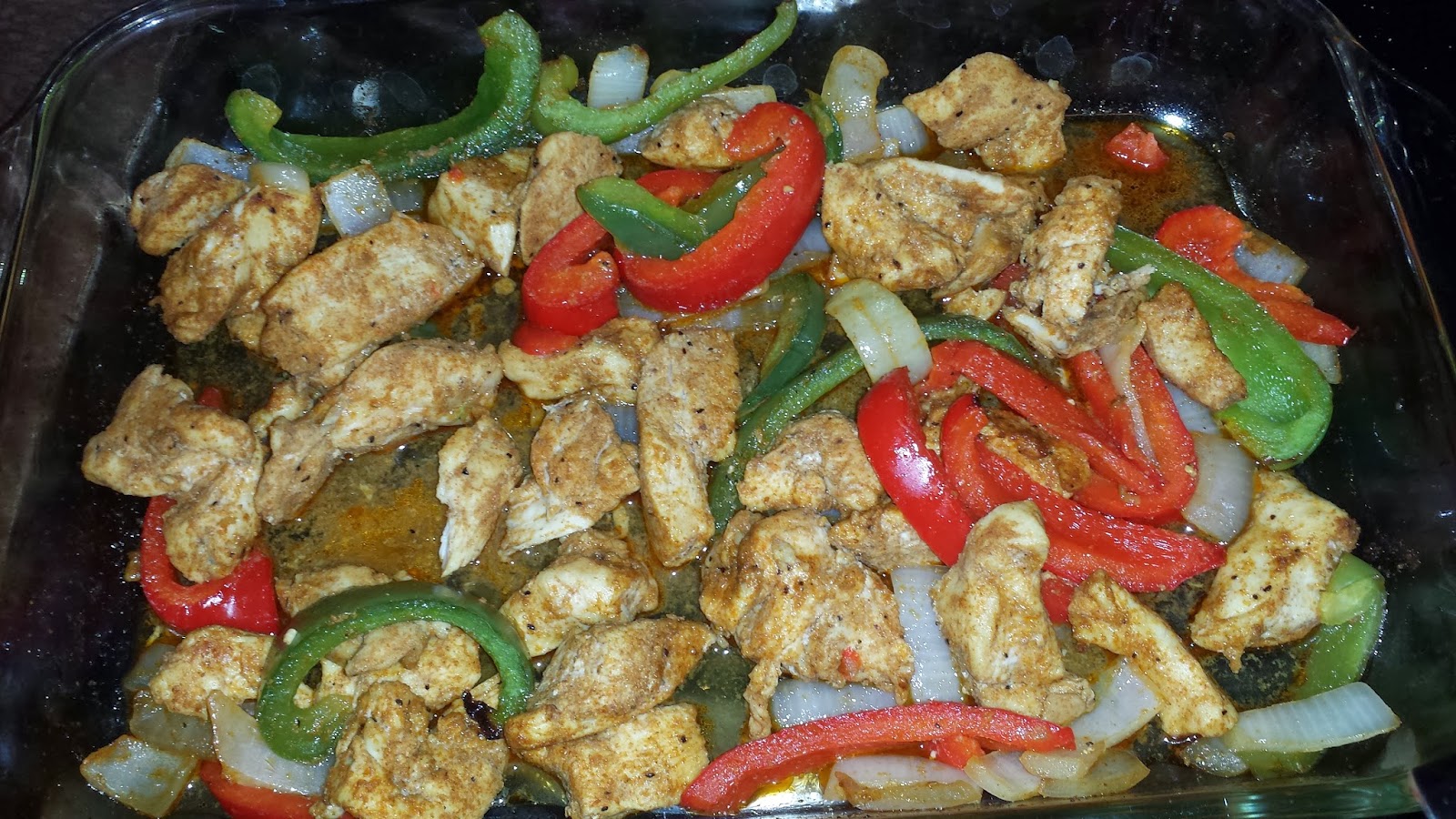 Anyhoo, that's the most recent Pin of Interest.

For my next one, I'm thinking a piece of art is in order.